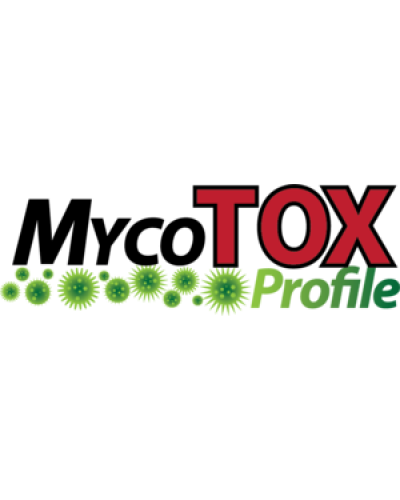 1) TEST KITS WILL BE SHIPPED BY MATRITOUCH.COM

2) SAMPLES WILL BE PICKED UP BY FEDEX AND DIRECTLY DELIVERED TO THE GREAT PLAINS LABORATORY IN USA.

3) THE REPORTS WILL BE SENT BY EMAIL ONLY & NOTIFICATION WILL BE GIVEN OVER PHONE.

Mycotoxins are some of the most prevalent toxins in the environment.  Mycotoxins are metabolites produced by fungi like mold, which can infest buildings, vehicles, and foodstuffs.   A majority of mycotoxin exposures are through food ingestion or airborne exposure.  In the European Union, 20% of all grains harvested have been found to be contaminated with mycotoxins.  Unfortunately, mycotoxins are resistant to heat and many processing procedures.

Fungi are able to grow on almost any surface, especially if the environment is warm and wet.  Inner wall materials of buildings, wall paper, fiber glass insulation, ceiling tiles, and gypsum support are all good surfaces for fungi to colonize.  These fungi then release mycotoxins into the environment causing symptoms of many different chronic diseases.  Diseases and symptoms linked to mycotoxin exposure include fever, pneumonia-like symptoms, heart disease, rheumatic disease, asthma, sinusitis, cancer, memory loss, vision loss, chronic fatigue, skin rashes, depression, ADHD, anxiety, and liver damage.  With our new GPL-MycoTOX Profile, we can identify mycotoxin exposures and make recommendations for detoxification treatments that have been effective.

ADVANTAGES OF THE GPL-MYCOTOX PROFILE

Aflatoxin M1 (AFM1) is the main metabolite of aflatoxin B1, which is a mycotoxin produced by the mold species Aspergillus. Aflatoxins are some of the most carcinogenic substances in the environment.  Aflatoxin susceptibility is dependent on multiple different factors such as age, sex, and diet.  Aflatoxin can be found in beans, corn, rice, tree nuts, wheat, milk, eggs, and meat.  In cases of lung aspergilloma, aflatoxin has been found in human tissue specimens. Aflatoxin can cause liver damage, cancer, mental impairment, abdominal pain, hemorrhaging, coma, and death.  Aflatoxin has been shown to inhibit leucocyte proliferation.  Clinical signs of aflatoxicosis are non-pruritic macular rash, headache, gastrointestinal dysfunction (often extreme), lower extremity edema, anemia, and jaundice.  The toxicity of Aflatoxin is increased in the presence of Ochratoxin and Zearalenone.

Ochratoxin A (OTA) is a nephrotoxic, immunotoxic, and carcinogenic mycotoxin.  This chemical is produced by molds in the Aspergillus and Penicillium families.  Exposure is primarily through contaminated foods such as cereals, grape juices, dairy, spices, wine, dried vine fruit, and coffee.  Exposure to OTA can also come from inhalation exposure in water-damaged buildings.  OTA can lead to kidney disease and adverse neurological effects.  Studies have shown that OTA can cause significant oxidative damage to multiple brain regions and the kidneys.  Dopamine levels in the brain of mice have been shown to be decreased after exposure to OTA.

Sterigmatocystin (STG) is a mycotoxin that is closely related to aflatoxin.  STG is produced from several species of mold such as Aspergillus, Penicillium, and Bipolaris. It is considered to be carcinogenic, particularly in the cells of the GI tract and liver.  STG has been found in the dust from damp carpets.  It is also a contaminant of many foods including grains, corn, bread, cheese, spices, coffee beans, soybeans, pistachio nuts, and animal feed. In cases of lung aspergilloma, STG has been found in human tissue specimens.  The toxicity of STG affects the liver, kidneys, and immune system.  Tumors have been found in the lungs of rodents that were exposed to STG.  Oxidative stress becomes measurably elevated during STG exposure, which causes a depletion of antioxidants such as glutathione, particularly in the liver.

Roridin E is a macrocyclic trichothecene produced by the mold species Fusarium, Myrothecium, and Stachybotrys (i.e. black mold).  Trichothecenes are frequently found in buildings with water damage but can also be found in contaminated grain.  This is a very toxic compound, which inhibits protein biosynthesis by preventing peptidyl transferase activity. Trichothecenes are considered extremely toxic and have been used as biological warfare agents.  Even low levels of exposure to macrocyclic trichothecenes can cause severe neurological damage, immunosuppression, endocrine disruption, cardiovascular problems, and gastrointestinal distress.

Verrucarin A (VRA) is a macrocyclic trichothecene mycotoxin produced from Stachybotrys, Fusarium, and Myrothecium. Trichothecenes are frequently found in buildings with water damage but can also be found in contaminated grain. VRA is a small, amphipathic molecule that can move passively across cell membranes.  The primary tissues affected by VRA are intestinal and gastric mucosa, bone marrow, and spleen.  VRA causes damage to human cells by inhibiting protein and DNA synthesis, disrupting mitochondrial functions, and by producing oxidative stress (due to generation of free radicals).  Exposure to VRA can cause immunological problems, vomiting, skin dermatitis, and hemorrhagic lesions.

Enniatin B1 is a fungal metabolite categorized as cyclohexa depsipeptides toxin produced by the fungus Fusarium. This strain of fungus is one of the most common cereal contaminants.  Grains in many different countries have recently been contaminated with high levels of enniatin.  The toxic effects of enniatin are caused by the inhibition of the acyl-CoA cholesterol acyltransferase, depolarization of mitochondria, and inhibition of osteoclastic bone resorption.  Enniatin has antibiotic properties and chronic exposure may lead to weight loss, fatigue, and liver disease.

Zearalenone (ZEA) is a mycotoxin that is produced by the mold species Fusarium, and has been shown to be hepatotoxic,  haematotoxic, immunotoxic, and genotoxic.  ZEA is commonly found in several foods in the US, Europe, Asia, and Africa including wheat, barley, rice, and maize.  ZEA has estrogenic activity and exposure to ZEA can lead to reproductive changes.  ZEA’s estrogenic activity is higher than that of other non-steroidal isoflavones (compounds that have estrogen-like effects) such as soy and clover.  ZEA exposure can result in thymus atrophy and alter spleen lymphocyte production as well as impaired lymphocyte immune response, which leads to patients being susceptible to disease.

SPECIES OF MOLD TESTED BY GPL-MYCOTOX

Aspergillus is the most prevalent mold group in the environment.  It has caused billions of dollars of in damage to crops and livestock.  Two of the most common Aspergillus mycotoxins are aflatoxin and ochratoxin.  The main target of these toxins is the liver.  These toxins have been found in all major cereal crops including peanuts, corn, cotton, millet, rice, sorghum, sunflower seeds, wheat, and a variety of spices.  Theyare also found in eggs, milk, and meat from animals fed contaminated grains.  Diseases caused by Aspergillus are called aspergillosis.  The most common route of infection is through the respiratory system.  Aspergillus can cause severe asthma when the mold colonizes the lung, forming a granulomatous disease.

There are over 200 species of Penicillium that have been discovered.  Penicillium chrysogenum is the most common of these species.  It is often found in indoor environments and is responsible for many allergic reactions.  Penicillium is also a known contaminant in many different food items.  Many different types of citrus fruits can become contaminated with Penicillium, but it can also contaminate seeds and grains.  One reason that Penicillium is such a common infestation is because of its ability to thrive in low humidity.  In the home, Penicillium can be found in wallpaper, carpet, furniture, and fiberglass insulation.  The most common mycotoxin produced by Penicillium is ochratoxin (OTA).  Ochratoxin is nephrotoxic, which means that it damages the kidneys.  It is also carcinogenic.

Stachybotrys is a greenish-black mold.  This mold can grow on materials with high cellulose and low nitrogen content such as gypsum board, paper, fiberboard, and ceiling tiles.  Stachybotrys is known for its production of the highly toxic macrocyclic trichothecene mycotoxins.  Two of the more common mycotoxins produced by Stachybotrys are roridin E and verrucarin.  In addition to these mycotoxins, the fungus produces nine phenylspirodrimanes, as well as cyclosporine, which are potent immunosuppressors. These immunosupressors along with the mycotoxin trichothecenes may be responsible for the high toxicity of Stachybotrys.

Fusarium’s major mycotoxins are zearalenone (ZEN) and fumonisin.  Fusarium fungi grow best in temperate climate conditions.  They require lower temperatures for growth than Aspergillus. Fusarium grows worldwide on many different types of grains including corn and wheat.  Exposure to mycotoxins from Fusarium can lead to both acute and chronic effects.  These symptoms can include abdominal distress, malaise, diarrhea, emesis, and death.  ZEN possesses estrogenic effects and has been implicated in reproductive disorders.

If you or a patient has done a GPL-MycoTOX Profile and the results show moderate to high levels of mycotoxins there are things you can do to help the body eliminate the toxins and prevent future exposures.  The first step is to eliminate or reduce exposure to mold.  The majority of exposures result from contaminated food, skin contact, and inhalation of spore-borne toxins, which is often caused by water-damaged buildings.  Inhalation of spore-borne toxins can be limited by detecting and eliminating damp and moldy environments, both indoor and outdoor.

Mold can enter homes through open windows, vents, doorways, and heating and air conditioning systems.  Mold grows well on organic products such as paper, wood, cardboard, and ceiling tiles.  Mold can also grow on insulation, drywall, wallpaper, carpet, fabric, and upholstery.  Mold can be controlled by cleaning and drying after water intrusion; having proper ventilation for showers, laundry, and cooking areas; making sure that windows, roofs, and pipes are free of leaks; and by controlling humidity levels.  After moisture problems are alleviated it is recommended that mold removal be performed by a licensed contractor.  Attempts to remove mold may cause mold spores to scatter and spread to other areas.  In addition, treating mold without proper ventilation could result in health problems caused by the release of mycotoxins from the mold spores.

Treatment for mold exposure should include fluid support to prevent dehydration.  The drug Oltipraz can increase glutathione conjugation of mold toxins while inhibiting the toxic effect of P450 oxidation, reducing liver toxicity and promoting safer elimination.  A diet of carrots, parsnips, celery, and parsley may reduce the carcinogenic effects of mold. Bentonite clay and zeolite clay are reported to reduce the absorption of mold found in food. Supplementation with chlorophyllin, zinc, A, E, C, NAC, rosmarinic acid, and liposomal glutathione alone or in combination have been shown to mitigate the oxidative effects of mold

Urine: 10 mL of the first morning urine before food or drink is suggested.  Fasting for 12 hours may increase the excretion of mycotoxins from the adipose tissue.  However, fasting is not recommended if running this test in combination with other urine tests.